The Aftermarket in China after COVID-19: valuable insights thanks to Demand Dashboard

How long the spread of COVID-19 will continue is difficult to predict. What is certain is that the situation already has a major influence on developments in the automotive sector and will continue to do so in the future.

At the beginning of 2020, sales of new vehicles were declining, which put manufacturers under pressure. At that time, however, the situation was not yet tense and nobody saw such a crisis coming. The focus was on sales from parts and repairs.

Maintenance and vehicle purchases are being postponed

The financial markets are facing major challenges. Entire cities are being locked up and national borders closed. These massive restrictions affect the industry: vehicle use is falling rapidly, private owners and fleets are postponing maintenance. Existing vehicles will probably be kept longer, so that the replacement cycle will be longer overall. On the one hand, this effect can negatively affect OEMs, but on the other hand it also creates opportunities for the aftermarket. These lie in increased demand for spare and wear parts, as it can be assumed that older and older vehicles will be used in traffic.

A good test market for the validation of many future hypothesis is China. The country has survived the peak of the epidemic and now seems to be slowly emerging from the crisis. In our first podcast episode Matthias Moritz, Managing Director Asia, talks about the impact of the pandemic outbreak on the local aftermarket, how the situation currently looks and what can be expected by the end of the year.

The outbreak of COVID-19 first made itself felt in Wuhan at the end of December 2019. The headquarters of TecAlliance China Ltd. is located in Shanghai, about 840 kilometers from the affected province. Until mid-January, the situation in TecAlliances’ Chinese offices was still well manageable. When the city of Hubei was locked, our offices in Shanghai had to follow strict regulations and many employees were in quarantine.

However, the coincidence of the outbreak of the virus and the festivities of the Chinese New Year did not yet have a major impact on the local automotive aftermarket at that time. Every year the economy prepares for this time of year and places orders in advance, which are then produced and delivered during the already quiet period. Delivery times have been significantly delayed due to the situation. However, the order situation was the same as in 2019 at the same time.

The observation of the market by TecAlliance Asia is also reflected in the usage data of the TecDoc Catalogue and can therefore be confirmed. Thanks to our business intelligence solution, the Demand Dashboard, we are able to aggregate and analyze data based on the customer’s vehicle and parts search behavior.

Dr. Bartosch Belkius, Vice President Analytics, has examined the data in detail and states: “If we superimpose the usage data from China for 2019 and 2020 around the time of the Chinese New Year, it becomes clear that this time causes a decline in the use of the TecDoc Catalogue every year. In 2020, it only lasts longer because the Chinese government imposed strict quarantine regulations and transport restrictions due to the spread of the virus.” 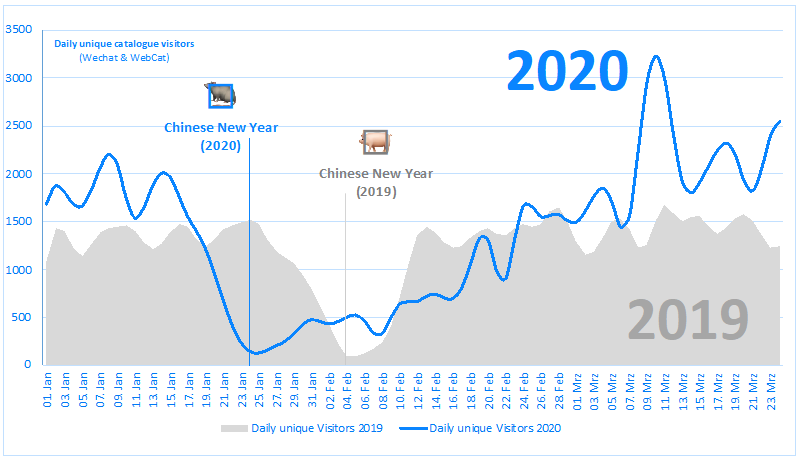 In February, the pandemic reached its peak in China and society is slowly paving its way back to normality. This can also be seen in our data from the demand dashboard. “China is now well on its way back to normality. Public life is taking place again. The user figures in the TecDoc Catalogue there have already returned to the levels seen in January 2020. Compared to March 2019, the number has even increased significantly,” says Dr. Bartosch Belkius.

The regular situation around the Chinese New Year was extended by one month, so to speak, due to the crisis. At the beginning of March, TecAlliance China Ltd. initiated a customer survey and found that Asian customers, who are also manufacturers, have increased their production to at least 80% again. The vehicle manufacturers were producing again and with them the suppliers such as the independent aftermarket.

The situation deteriorated when the markets in North America and Europe collapsed. It is to be expected that some companies that operate exclusively internationally and do not focus on the domestic market will not survive the crisis.

The crisis will continue to demand a great deal from the aftermarket community well into the new year and is primarily aimed at creating flexible added value. The influence that COVID-19 has on the economy and consumer behaviour also holds great potential for the IAM. All market participants must prepare themselves for this and actively address it.