Since January 2014 TecAlliance has been gradually introducing a new TecDoc product data standard for workshop equipment, tools and special tools. In two events held by the German association of manufacturers and importers of automobile service equipment (ASA e.V.) and at two information events organised by TecAlliance, workshop suppliers could learn all about the standardisation project.

The new product data standard for workshop equipment and tools, defined with the help of the specialists from ASA, is already available to manufacturers to enter data. It will be made available in catalogues for the independent aftermarket in time for Automechanika (Catalogue Version 04/2014). Standardised product information for special tools, workshop needs, DIN and norm parts, equipment and labour protection will follow starting in November 2014.

TecAlliance is inviting interested parties to an additional information session during the Automechanika in Frankfurt. On 18.09.2014 from 1 pm to 3 pm workshop suppliers and tool manufacturers can learn about the new product data standard, the status of the database and future developments. You can register for the event by using the online form at theTecAlliance Homepage – participation is limited. 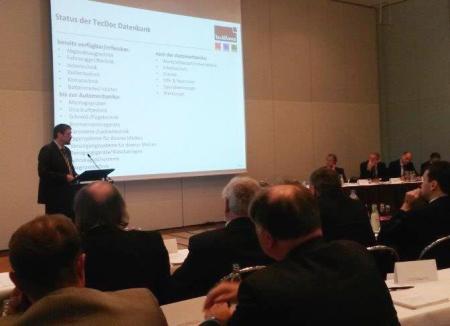 Alexander Bresslau (Director Sales DACH for TecAlliance) presents the status of the standardisation project at the ASA Annual Members Meeting on 7 May 2014 in Berlin.